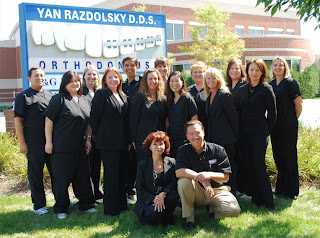 Dr. Yan Razdolsky lectures in the US and internationally and has numerous publications. He had served on many committees in dentistry and orthodontics to further dental science. Ever the continuing student, Dr. Razdolsky and his staff regularly participate in orthodontic, practice management, and communication seminars to improve their skills and expand their services.

Dr. Razdolsky’s inventions include five Razdolsky Distraction Osteogenesis Devices (ROD Appliance), which are used for horizontal and vertical bone growth in the jaw. He has received many accolades for his work all over the world.

When Dr. Razdolsky is not at the office, you could probably find him at one of his children’s hockey games, meets, or rooting for the Blackhawks if it’s hockey season! He and his wife, Anna, have 4 children that keep them very busy and very happy: 2 boys and 2 girls. His other interests are skiing and traveling.

After receiving his BS in Biology with honors from the University of Illinois at Urbana-Champaign, Dr. Vij continued into dental education at the University of Illinois (UIC), College of Dentistry. After earning the degree of Doctor of Dental Surgery (DDS) in 1999, he pursued a two-year residency and training in pediatric dentistry at UIC (2001). Dr. Vij completed his specialty training of Certificate in Orthodontics and Dentofacial Orthopedics in 2007 at Jacksonville University. He is currently on staff with UIC as Clinical Assistant Professor. Dr. Vij consistently demonstrates thoroughness and keen diagnostic acumen throughout all aspects of dental patient care. He continues his education by teaching residents at the University of Illinois, which keeps him challenged, which he particularly likes.

During dental school, Dr. Vij was the recipient of numerous academic awards. These awards include the prestigious status of distinctive awards such as the Oral Maxillofacial Radiology Award, American Society of Dentistry for Children Award, and the American Dental Association - Caulk/Dentsply Research Award.

When he is not working, Dr. Vij works out at the gym and plays soccer and tennis.